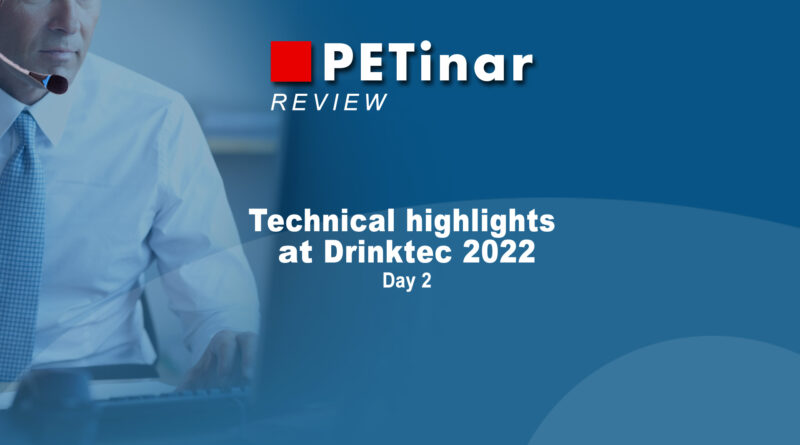 Review on the PETinar series

Expectations were again high on the second day of the PETinar series: the presentations by PackSys Global, Sacmi and Stack Teck were eagerly awaited. After the first day with presentations from z-moulds, who presented smaller, adapted mould sizes for the production of closures on smaller machine types, or the new high-quality tethered caps from Bericap, as well as the presentation of the new PAC-E machine generation from Sumitomo (SHI) Demag, the standard was high!

Ueli Kobel, International Sales Manager, Product Manager Beverage & Specialties Division at PackSys Global, also fulfilled audience expectations and presented the new efficient and highly precise folding and cutting machines for the production of plastic closures. As part of the Brückner Group, Packsys Global has more than 300 employees and customers in 90 countries worldwide. Headquartered in Switzerland, Packsys Global currently has more than 500 machines on the plastic closure market. Ueli explained that all closure machines can be adapted for conventional or different types of tethered closures and that capLAB – the first inline system for quality testing of closures – can be used to comprehensively inspect tethered closures. To serve the tethered closure market, Packsys Global has developed three technologies: the smarTether, experTether and the CapCompass.

SmarTether is a technology with a combination of various cutting segments to create perforation lines for the TE band and the tether function. This can be simple horizontal cutting, or it can be combined with multiple vertical or diagonal slit lines. smarTether purposely leaves a thin and controllable skin in defined sections of the separation lines. It supports during the capping process and will easily break at the first opening. Ueli states that smarTether can be applied on all existing major PET bottle closure applications. The technology delivers a high-performance tethered closure suitable for high-speed capping processes.

The experTether is for lightweight plastic closures which require perfect and continuous support on both blades of the knives during the slitting process. ExperTether and smarTether can both be used for the same cutting line pattern. With experTether the entire slit contour is 100% cut through – including the vertical and diagonal section. This is done by the synchronisation of the rotating spindles to the fixed slitting knives. Independent of the machine speed, the synchronised inner and outer tooling provide unique slit accuracy for customised slitting patterns for the tethered feature. Both the TE band and the tethered feature are processed using the same mechanical cutting technology.

CapCompass is the method to bring a closure, when first opened, to a position which is locked and does not disturb the consumer while drinking. Gable top or other carton packaging applications are major markets for this processing method. Whether it’s a pre-moulded hinge, a thread start, an embossing, or some other feature, the slit lines can be positioned for functionality and/or marketing purposes. CapCompass is made for cutting closures at the right place and could be combined with smarTether or experTether additionally to TE Band slitting.

At Drinktec PackSys Global also presented its new TEM Plus, Ueli continued. This versatile machine is integrated into any production line due to independent control and optional vision inspection system. The TEM gives flexibility in the process sequence thanks to its modular design for S/F or F/S of TE band. It also allows a large variety of cap dimensions, including sport caps. Contour slitting and synchronised cutting enable tethered applications. The nominal diameter range is from 18 mm to 90 mm. Closures from 10 mm to 48 mm high can be processed at a speed of 800 ppm for heights up to 48 mm and 1,000 ppm for heights up to 27 mm, Ueli summarised.

After this comprehensive insight into PackSys Global’s slitting and folding technology, Iacopo Bianconcini, Manager Marketing and Product Development at Sacmi, took over the microphone. He posed the question of how the digitalisation of closure manufacturing could be translated into a real economic advantage. Iacopo gave a brief introduction to Sacmi: with 4,720 employees worldwide Sacmi has a net worth turnover of more than €1,5 billion, with 86% being exported. It has 80 companies worldwide of which 10 are manufacturing facilities. He pointed out that Sacmi develops multi-material packaging solutions for the most diverse platforms, to meet the needs of beverages and food producers all over the globe. In so doing, Iacopo stated that Sacmi is at the forefront of the global transition to a circular economy in the packaging field. This is achieved using the 3Rs approach; Reduction, by light-weighting, Recycling while using new PCR resins and Reusing by producing returnable packages. In addition, Sacmi fulfils this objective by using rPET material in different packaging applications, by developing tethered caps which enable an easier recycling of the whole package.

Returning to his question of how to translate digitalisation of closure manufacturing into a real economic advantage Iacopo explained it as generating, elaborating, and profiting from data. During the presentation of a compression moulding machine (CCM) for closures, shown at Drinktec, Iacopo explained how the data is generated. Sacmi has developed a new combination of hardware and software, called SmartPack, which generates the data. The hardware and software are designed to ensure fast, precise action on the production process. These features maximise flexibility, real-time precise adjustment during production, stated Iacopo. The SmartPack focuses on four aspects of the production process: pellet insertion, the material & thermic control and finally the hydraulic system.

With SmartPack it is possible to get a graphic representation of the dose of molten material inside the mould during the production process. Through this and other devices the time for pellet cut and insertion adjustment is reduced by more than 50%. Process drifts are detected very quickly so that the operator can react before a problem occurs. It is also easy to detect any wear, because of the multiple checks enable the operator to predict wear related behaviours. This has an impact on the maintenance time of the machine, which schedule is adjusted according to sensors feedback, ensuring both process consistency and the longest life of the hardware in use.

The second focus point is the material control where incorrect resin is detected. An algorithm programmed by Sacmi observes the change from one resin to another in real time. If the wrong resin is in production, the system issues an alarm first, then it stops the machine. The SmartPack also supports an assisted colour change, suitable for existing receipes and if the colour is already in the hopper. Soon as the colour change is started, the system starts deriving the previous colour and model in both the CCM press and the vision inspection system, until the new requested colour is detected, to be suitable for standard production.

For a powerful and long-lasting machine system, it is necessary to ensure the good health of the hydraulic parts. In this case, the SmartPack checks the physical and chemical features of the oil, which, as Iacopo mentioned, is the life-blood of the machines. In addition, the hydropneumatics accumulators precharges are continuosly so that the operator can plan corrective actions in case of a loss of pressure. Thus, a huge package of data is produced, but how is it to be evaluated?

The collected data is stored in the cloud and analysed using AI. For example, a comparison of two resins can be made for a desired application: which material is better suited, which resin saves material and engineering costs as well as machine maintenance. Iacopo concluded by summarising the features of the SmartPack care maintenance program; 22% less labour time, 20% fewer spare parts needed, and 55% more production efficiency is achieved over a two-year period, according to a case study, which resulted in 20,000€ savings for the customer.

The last lecture in this PETinar series dealt with a new process during the production of preforms. Mr Jordan Robertson, VP of Business Development and Marketing at StackTeck presented the new PiCool technology, an advanced post mould cooling system for PET preforms. Jordan started by explaining existing conventional post mould cooling technology: In the preform moulding industry, there are 2 main technologies used for the cooling/transfer stations. Both provide internal convective cooling by introducing a stream of air into the preform, either by blowing air in, or in a reverse manner by drawing air out. Both methods have their advantages, and both offer improvements to cycle time and preform quality. So the question is: why did StackTeck set out to develop a new method that we now call PiCool?

Because, said Jordan, we recognised thermal variations. We found through thermal imaging that preforms often have significant temperature variations, both lengthwise and circumferentially about the preform. This became a limitation when trying to accelerate cycle times, as certain sections of a preforms’ surface were hotter than others. These hot areas could result in deformation issues, contact marks, or sticking to one another. We then embarked on a project to improve the cooling uniformity at the final stage of moulding.

With the PiCool concept the air stream enters the preform in a spiral direction, continuously wrapping around the internal surface picking up heat, then exiting through a centre exhaust tube. The spiral trajectory of the air stream forces the air over the internal curvature of the preform (concave shape). The concave shape creates extreme turbulence of the air flow: an effective “scrubbing” of the inner surface layer of the preform takes place, this creates a more uniform cooling profile both axially and circumferentially and significantly improves heat transfer to result in a colder preform temperature. There have been tests of the PiCool technology on a 96 cavity Netstal PET-Line 4000 preform system (side-entry). These tests show that while delivering a reduced preform temperature, a significantly faster cycle time was achieved.  Two case studies were presented showing an average cycle time improvement of 13.4% as compared to conventional post mould cooling.

We thank our sponsors: