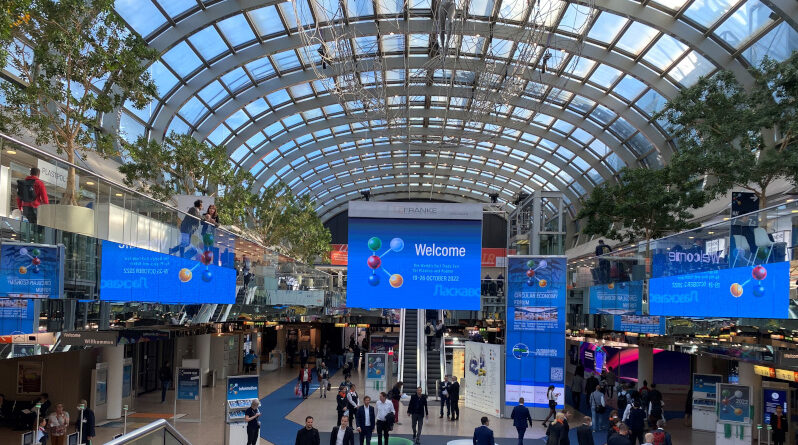 The joy of the plastics and rubber industry at finally being able to exchange ideas in person on a global level again after three years characterised K 2022 Düsseldorf and ensured an excellent mood among the 3,037 exhibitors. The companies reported good leads and a marked willingness to invest among trade visitors, mentioning promising new customer relations and the conclusion of numerous, in part, spontaneous business deals.

176,000 trade visitors from all continents travelled to the event in Düsseldorf. At over 70% the proportion of international guests at K 2022 remained at a constantly high level, say the organisers.

It was especially the wealth of new technology developments that raw materials producers, machine manufacturers and plastics processors presented for implementing the circular economy, resource conservation and climate protection that thrilled the trade visitors.

The trade visitors at this year’s K travelled from 157 nations to the Rhine. Next to Germany, those European countries strongly represented on the visitors’ part included the Netherlands, Italy, Turkey, France, Belgium, Poland and Spain. With 42% of visitors coming from overseas, the reach of K is as high as usual among the international trade audience, state Messe Düsseldorf. While visitors from the East Asian region, in particular, were less well represented than at K three years ago due to the currently more difficult conditions in those countries on account of quarantine regulations, numerous visitors from the USA, Brazil and India were welcomed at K 2022.

For around two thirds of all visitors polled machinery and plant construction ranked first in terms of interest. 57% and, hence 5% more than at K 2019, said they were interested in raw and auxiliary materials, with recyclates and bioplastics being particularly popular. For 28% semi-finished products and technical parts made of plastics and rubber were the main reason for coming (multiple responses possible). Over 70% of all visitors come from top and middle management.

Top marks were given by visitors to K 2022 for the completeness of its ranges and its mapping of the entire supply chain. 98% of all professionals stated they had fully achieved the goals associated with their visit.

During the eight trade fair days it became clear that this year’s K was right on target with its selection of hot topics, circular economy, climate protection and digitalisation. In terms of investment intentions, machinery and equipment for processing and recycling stood out at 43%. The focus was particularly on sustainability, but also on circular economy and energy/resource efficiency in production. Around 40% of decision-makers said they were looking into the topic of decarbonisation.

The K specials, which also focused on the three hot topics, were also well received. The official special show, ‘Plastics Shape the Future’, focused on the economic, social and ecological challenges and potential solutions around the K guiding topics in high-calibre discussions and lectures, and this show was well attended throughout.  The Circular Economy Forum, where the VDMA and 13 of its member companies demonstrated the importance of technology in the implementation of the circular economy in the plastics industry, scored points with the international audience with live demonstrations and a great deal of well-founded knowledge as well as detailed information on the topic.

At this year’s K in Düsseldorf, there was also a lot of discussion about the global production language, OPC UA. This standard allows the processing parameters of the machinery and equipment involved to be coordinated more precisely and in a more targeted manner. This, in turn, is considered an important prerequisite for optimised circular management. 40 companies from eight countries participated in an OPC UA demonstration project at the trade fair.

At the Science Campus both exhibitors and visitors at K 2022 were provided with a condensed overview of scientific activities and findings in the plastics and rubber sector. Numerous universities, institutes and funding bodies offered opportunities for direct dialogue here.