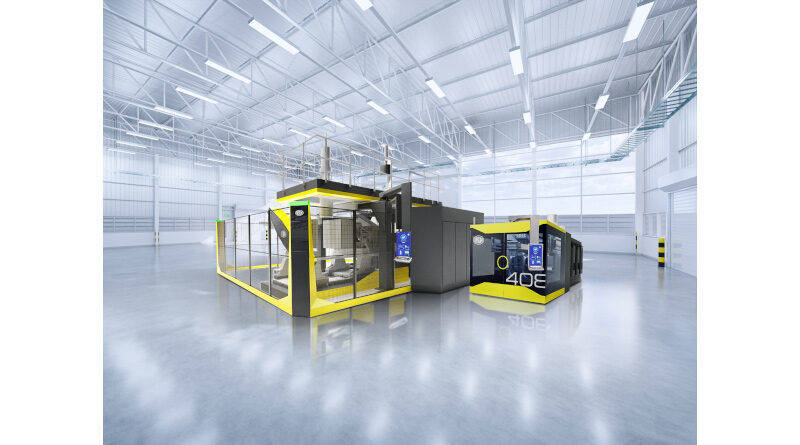 The focus of Bekum’s trade fair presentation is the market launch of the new machine series for packaging and industrial containers. At the last K’ fair, Bekum presented the machine Concept 808. With the newly developed machines of the 8-series, Bekum intends to set the benchmark for future extrusion blow moulding machines. New features include the multiple award-winning machine design, energy-efficient HiPEx 36D extruders, spiral mandrel die heads for uniform melt homogeneity, Bekum’s Industry 4.0- capable BC 8.0 machine control system and the patented C-frame for good clamping force distribution. Depending on the size, the EBlow machines of the 8-series are available as single- and double-station versions.

The sizes EBlow 208D, 308D and 408D form an independent, modular construction kit as components of the 8-series platform. The robust design has been optimised for a small footprint and is characterised by flexibility and maximum efficiency. Reduced moving masses allow short dry cycle times. Mould changes, maintenance and service are simplified by easy accessibility to the extrusion head and the blow mould. The new small blow moulding machines, in the 8-series are designed for small packages and have clamping forces of 60-120 kN.

The modular, flexibly configurable extrusion blow moulding machines of the 8-series include the machine sizes 508, 608, 708, 808, 1008 and 1208, all of which are available as double-station machines. The 508, 608, 708 and 38 sizes are also offered in single-station versions. The series offers clamping forces from 200-500 kN and has been designed for maximum productivity and ease of use. With the e-Twin toggle, Bekum presents a new, unique clamping drive system for short clamping force build-up times, which, in conjunction with the patented C-frame, guarantees platen parallelism. Thus, covering the most diverse production and material requirements for packaging and handled canisters up to 20 l in an efficient way.