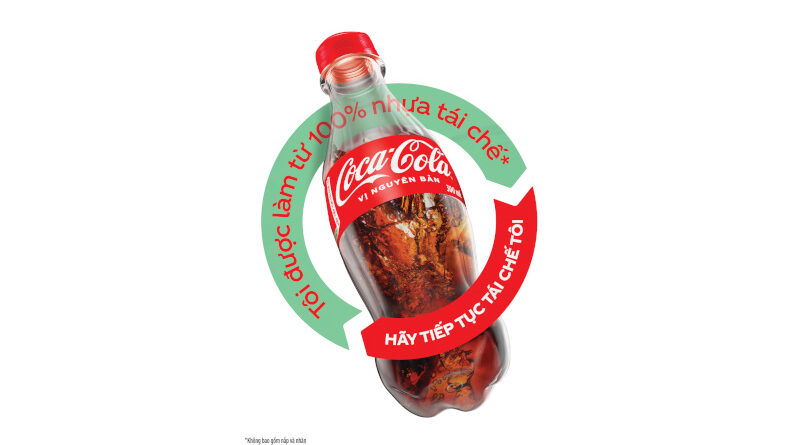 Coca-Cola Vietnam is introducing bottles made from 100% rPET (excluding caps and labels), across the country. The company expect to avoid using around 2,000 tonnes of new plastic in Vietnam annually by this step.

The new rPET packaging will debut this September for bottles of Coca-Cola Original and Coca-Cola Zero Sugar including 300ml bottles and offers the double benefit of convenience and sustainability for on-the-go consumers in Vietnam.

This announcement is a significant step for the Coca-Cola system in Vietnam to grow its circular economy vision and help bottles become another bottle. The safety of the new rPET plastic packaging has been thoroughly reviewed and complies with Vietnam regulations and The Coca-Cola Company’s global standards for food-grade rPET packaging.

The Coca-Cola Company has a global World Without Waste vision to collect and recycle the equivalent of every bottle and can it sells by 2030. But it’s not just about collecting and recycling bottles, it’s also about using less new plastic. As such, the company has a global goal to use at least 50% recycled content in its packaging by 2030. The Coca-Cola Company now offers 100% rPET bottles in more than 30 markets around the world.

To build awareness and encourage action on recycling last year, Coca-Cola rolled out a prominent ‘Recycle Me’ message across all its packaging in Vietnam. Sprite also transitioned and replaced its iconic green bottles to clear packaging in Vietnam in order to give the bottles the best chance of another life.

Since 2018, Coca-Cola Vietnam has been working with partners such as Centre for Supporting Green Development (Green Hub), and local recyclers to support and incentivize informal plastic waste collectors who are the backbone of the recycling industry in Vietnam. With support from The Coca-Cola Foundation, the company is furthermore partnering with Unesco in their programs to raise community awareness and find innovative solutions for plastic waste management at Cu Lao Cham and Cat Ba islands since 2020.

Coca-Cola Vietnam is one of the founding members of Packaging Recycling Organization (PRO) Vietnam, a partnership with other leading companies, recyclers and government agencies to accelerate local packaging collection and recycling in support of a clean and green Vietnam.