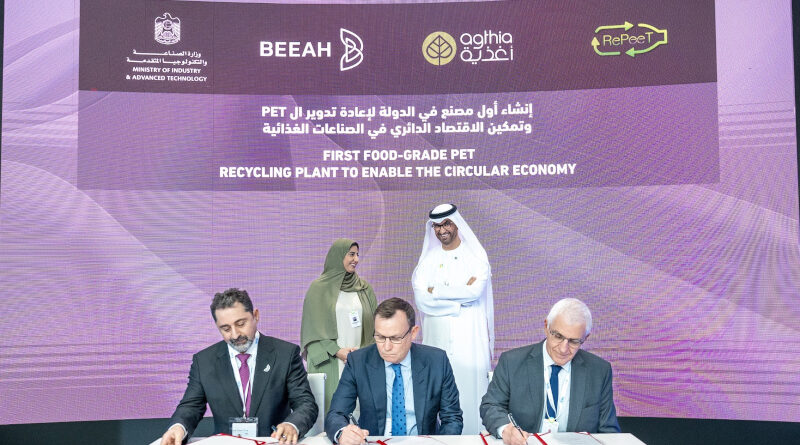 The Ministry of Industry and Advanced Technology (MoIAT) oversaw the signing of a Memorandum of Understanding (MoU) at Abu Dhabi Sustainability Week (ADSW) on 17th January 2023, which will lay the groundwork for a 12,000 t/a PET recycling facility in Abi Dhabi, UAE, as announced by the Emirates News Agency, WAM.

The 40,000m2 facility in Abu Dhabi is intended to create 100 jobs and avoid the emission of 18,000 metric tonnes of CO2 annually at full operating capacity.

Omar Al Suwaidi, Under-Secretary of MoIAT, said, “Collaboration is the key driver behind the shift towards a more sustainable industrial sector and a greener economy. Accordingly, the ministry focuses on facilitating partnerships between stakeholders, including financial institutions, national industrial companies, and global corporations, with the aim of supporting GDP growth as well as the UAE’s net zero strategic initiative.”

“As we approach COP28, the ministry will continue to amplify the important initiatives that fall under the national industrial strategy. For instance, we will utilise Make it in the Emirates to attract international investors and companies to engage with the UAE’s industrial sector to help us unlock the opportunities associated with industrial transformation, and circular economy. These opportunities will ultimately help to build a more sustainable, efficient and competitive industrial sector, supporting not only the national economy, but also the global climate agenda,” Al Suwaidi added.

The MoU was signed between Veolia Middle East subsidiary Repeet, UAE-based sustainability pioneer Beeah Group, and F&B conglomerate Agthia. In the frame of the project under study, Repeet would operate the recycling plant, while Beeah Group would supply a seven-year feedstock of plastics. Meanwhile, Agthia would provide a seven-year offtake for products. The feedstock will be post-consumed PET bottle bales while the offtakes will be food grade recycled PET resin.

Following the signing, Khaled Al Huraimel, Group CEO of Beeah Group, said, “Aligning closely with the national vision and contributing to the UAE’s sustainability targets have been the driving force for our organisation as we develop and implement circular economy solutions through our waste management business. Through this agreement, we can now further support the UAE’s sustainability agenda and accelerate the circular economy. We are honoured to partner with MoIAT, Repeet and Veolia to tackle the important issue of plastic pollution and make a positive impact together on a larger scale.”

This partnership comes in line with MoIAT’s recent ministerial decree regulating the trade of recycled plastic water bottles. The move aims to facilitate the manufacturing of water bottles using recycled plastic in line with top public health and food safety standards. With time, more local water bottling companies are expected to embrace this circular economy journey and introduce more and more recycled plastic to produce their packaging. This is projected to reduce avoid 50,000 metric tonnes of CO2 emissions, to enhance the national in-country value by AED150 million annually, and to create more than 1,000 jobs.

MoIAT works closely with industrial stakeholders, including financial institutions, to leverage incentives and enablers that lead to a business-friendly environment that is attractive to investors.

As part of the UAE’s national industrial strategy, the ministry has introduced various programmes and initiatives that support the sustainable development of priority sectors, contributing to the nation’s economic diversification.

The ministry has a sizeable presence at ADSW, which takes place this week in the run-up to COP28.