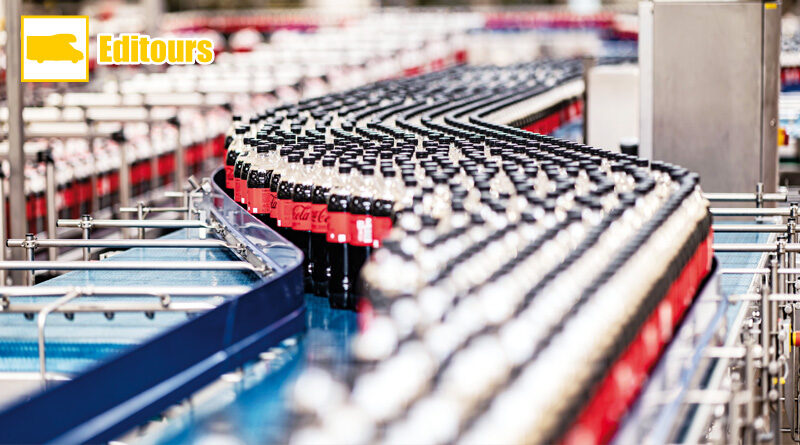 In Neureut, a district of Karlsruhe in Baden-Wuerttemberg in the south of Germany, the local site of Coca-Cola Europacific Partners Deutschland – CCEP for short – is celebrating its 40th anniversary. Produced here are the 1.25 l Coca-Cola PET single-use bottles and other drinks cans. It supplies CSDs not only to the state of Baden-Wuerttemberg itself but also to neighbouring states, with some of the soft drinks also going to other countries in Europe.

Besides Coca-Cola, the brand’s “Monster” range of energy drinks are exclusively produced here for all of Germany. At the same time as the anniversary celebrations, the manufacturer is also launching its newly created capacities for drinks production, materials supply and logistics. The beating heart of the almost US$16 million expansion is a technologically completely reworked PET line, which is making the anniversary site fit for the future. Operations Manager for the site, Mr Andreas Dederer, spoke to us about origins, technologies and plans.

In March 1980, the then Coca-Cola concession Getränke Troullier GmbH & Co. KG began construction of the factory at a cost of 18 million German marks. After its completion in November 1981, it was inaugurated in May 1982. The new factory was located on the “Kleines Bruch” industrial estate, where we find ourselves today. But before its construction, Coca-Cola had been bottled in Karlsruhe-Neureut since 1969 in a factory in Unterfeldstrasse. Relocation took place then because there was no option to expand there. “However, the connection between Coca-Cola and Karlsruhe dated back even further,” explained interviewee Andreas Dederer. “Their common history began over 85 years ago, when the Karl Troullier concession sold its first bottles of Coca-Cola in Herderstrasse in Karlsruhe. In the first year, they achieved sales of 9,000 cases.”

Mr Dederer has been employed in the drinks industry for 25 years. In Deizisau, to the south-east of Stuttgart, he began his career as a Shift Manager at the Urbacher Mineralquellen glass and multi-use container site, a branch of Coca-Cola Erfrischungsgetränke AG (CCEAG), as it was at the time. After nine years, he transferred to the Urbach site to work there as Production and Maintenance Manager. In 2006, he was promoted to Operations Manager, initially provisionally, and from 2007 to 2010, he was made permanent in that role. He returned to the Deizisau site in that role and ran it for the following eight years. In 2018, he finally moved as Operations Manager to Karlsruhe. “I was attracted by the exciting task of expanding the site, the large-scale production and the opportunity to build a new team fit for the future,” he remembered.

Part of being fit for the future included the single-use PET line, just coming into operation. “Initially, we combined the investment in the site’s new line with production capacities,” said Dederer. “At the CCEP site in Liederbach, near Frankfurt in Hesse, we couldn’t see any expansion options and so decided to bring the single-use PET line there dating from 2013 into line with the latest technology and relocate it to Karlsruhe, where the necessary expansion options were available. The plan was to further extend the factory for strategic reasons, with the aim of expanding PET manufacturing, but nevertheless to keep production in the south of Germany, which was possible through this relocation. Here in Karlsruhe, this enabled us to increase the overall efficiency of the company, i.e. greater volumes and more staff, and we created around 70 new jobs,” summarised Andreas Dederer.

Currently, a total of 248 employees work on the 56,000 m2 Neureut production site, where there are further expansion possibilities.

Coca-Cola and Coke Zero account for about 80% of the overall production, some 15% for Fanta Orange, Sprite, Mezzo Mix, and Coke Light and circa 5% for other products – all in 1.25 l PET bottles. Up to 36,000 bottles pass through the bottling system every hour. Almost 2.5 million leave the factory each week for the south and west of the country. For its upgraded Liederbach lines, operation relies on blowing and bottling technology from Krones. PCO1881 preforms of 31.5 g are produced inhouse on six Netstal PET-Line systems, not at the Karlsruhe site but at the site in Halle. Blowing in Karlsruhe is on a Krones Contiform Bloc C316. CCEP purchases the caps from Bericap and these are to be gradually replaced by tethered caps. Mr Dederer said: “In Karlsruhe, we are planning to adapt the PET line accordingly in calendar week 9. This line conversion should take place on site over 2.5 weeks.” To supply the new production lines and so we can produce more on the can lines, production-related supply areas have also recently been modernised and expanded. This includes the tanks in the Coca-Cola syrup room that can now supply two production systems at once with syrup for drinks bottling. Water treatment has also been reworked and expanded so two production lines can be operated at once. Six new loading ramps have been constructed in logistics, which should ensure that from now on, twice as many lorries can be loaded at the same time.

Furthermore, the company fills 330 ml sleek and standard cans, as well as the Monster Energy range in 500 ml and 568 ml. A total output of 342 million cans and 115 million PET bottles is planned for this year. Mains water is used and in 2021, consumption was around 2.377 litres per finished drink, we were told.
Trends, sustainability and coronavirus lessons
Compared to last year, water consumption has increased slightly, Mr Dederer explained. “This was caused by installation, new process techniques and validation processes. But the aim in 2022 is to reduce water use by 25 per cent. Furthermore, we have our own mineral well available, which currently isn’t in operation. However, this will also be used in future for reasons of sustainability and efficiency,” continued Mr Dederer.

“We are also pursuing the aim, besides converting to tethered caps, of manufacturing our entire Coca-Cola bottle portfolio from 100% rPET in the upcoming years.” In 2019, the company responded to a generally stronger demand in the glass sector by investing US$5.3 million in a new 1l glass multi-use line in Deizisau.

The Neureut site offers the opportunity to expand further in future but there are no expansion plans, at least for the moment.

The pandemic that started in 2020 was an endurance test for the drinks manufacturer. “We’ve learned to work more flexibly with regard to time and location. But it was a challenging time overall for the factory,” said Dederer. “However, we’re proud of our employees because they all pulled together, which has had a positive effect on team spirit. As the only factory in Germany producing the Monster products, we were under particular pressure to maintain production and therefore the supply for Germany. We managed well. Even during the coronavirus pandemic, the energy category experienced very strong sales growth. In the last 12 months, the category has seen double-digit growth in sales compared to the previous year so is stronger than all other categories of non-alcoholic soft drinks, such as juices. The drinks are very popular primarily with young and affluent adults, who are also very open to innovation. In the last five years, Monster Energy has been a growth driver in the energy category and grew even more strongly than the energy drinks category overall.”