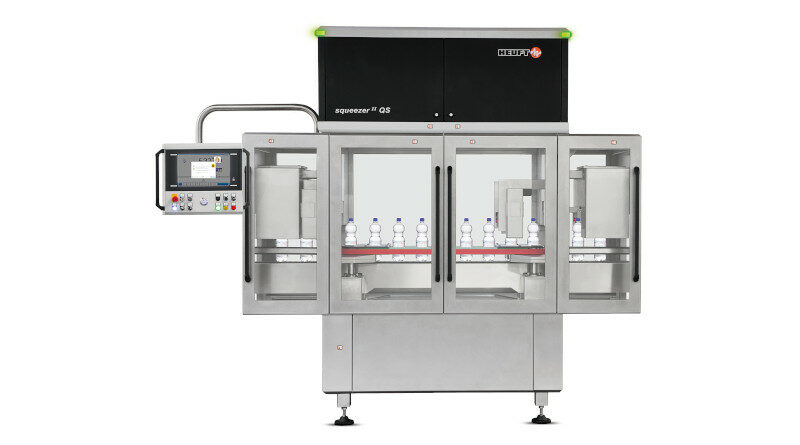 Combined with the new improved version of the Heuft FinalView II Cap for a complete tethered cap inspection, the latest release of the Heuft squeezer II is a complete solution when it comes to sustainably safeguarding the integrity of filled PET bottles.

Heuft presents the latest version of its FinalView II Cap solution for a complete tethered cap inspection. In combination with the latest release of the Heuft squeezer II, the components provide a complete solution for filled PET bottles. Now, not only the fill quantity and tightness of the containers themselves can be checked with precision, but also, among other things, the correct application, integrity, and functionality of their closures – up to the complete all-round inspection of asymmetrical tethered caps including rotation angle detection.

The inspection path of the new Heuft squeezer II is flexibly extendable depending on the application for an even more precise detection of stress cracks and micro leaks which are hardly visible to the naked eye: The transport belt which guides the bottles and pressurises them in an exactly dosed manner for a comparative fill level check can now be integrated in different lengths for this purpose. At the same time, the sensitivity of the sensor system for the exact measurement of the internal pressure of the full containers has been further increased, says Heuft.

The easy-to-connect Heuft FinalView II Cap (opening image) enables a full-covering all-round inspection of the PET bottle screw caps. This also applies to tethered plastic caps. The smart Heuft reflexx A.I. image processing produces a detailed picture of new features; these include the unusually large gap between the cap and the tamper-evidence band of rotationally symmetrical tethered caps. This means that affected full containers are no longer rejected as faulty. In order to keep the false rejection rate at a very low level even with asymmetrical tethered caps, the FinalView II Cap has received specific software upgrades. This enables it to inspect both such closures which deviate from the usual rotational symmetry from one or more perspectives in a gaplessly and precise manner.

In addition, Heuft says that the enhanced software masters another challenge in the detection of closures that are too high and possibly leaky: it can now reliably detect caps which exceed the targeted height by as little as 0.5 mm. The cap angle detection system has also been enhanced.  It verifies that the tethered caps are always correctly aligned and that they are actually screwed down as far as they should be.

For mouths which are made of darker, less transparent rPET, the company has integrated a new special lighting system into the compact unit for the cap inspection of up to 72,000 bph directly on the running conveyor. Defective tamper evidence rings can thus be easily detected even under such conditions.