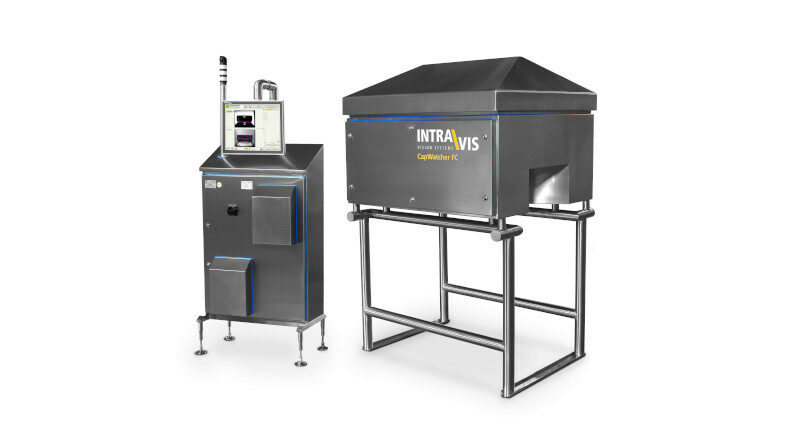 Intravis GmbH will present its wide range of vision inspection systems for the plastic packaging industry. The company will provide information on the CapWatcher FC, a system for use in the wet area of filling lines, which for the first time brings a new inspection technology as well as the washdown design for high splash water protection. “In recent years, we have further expanded our expertise in the wet area and developed our inspection systems based on our extensive project experience,” says Dr Gerd Fuhrmann, CEO at Intravis.

With the CapWatcher FC, Intravis introduces for the first time a new inspection technology that uses index markings to inspect the application angle. With the help of five side cameras, the system detects whether the closure is screwed on in the target position or whether it has been screwed on too far or not far enough. The vision inspection system is guided by markings on the closure and neck support ring that are barely perceptible to the end user. If these markings are within a tolerated range of each other, the system assumes that the closure has been completely and correctly fitted and releases the bottle for packaging. The production line operator also receives comprehensive statistics correlating the average application angle with the capper’s tool. This allows malfunctions of a tool to be detected at short notice. In addition, the CapWatcher FC inspects the bottle for damage, presence and correct positioning of the closure, and records the fill level of the bottle.

The CapWatcher FC is completely designed in the new washdown design. Dr Gerd Fuhrmann: “The washdown design is intended for Intravis systems that are located exclusively in the wet area of the filling lines behind the filler. Thanks to the specific design, the inspection unit and the associated control cabinet are splashproof all around and meet the hygiene requirements of the fillers.” The design simplifies cleaning of the system as the exterior is designed to drain off any water. In addition, the interior of the CapWatcher FC is easily accessible.

Besides the CapWatcher FC, the label inspection system LabelWatcher is now available in the washdown design. Janina Orlowski, Product Manager at Intravis: “With the washdown design on the LabelWatcher, we are once again significantly expanding its application possibilities. Each component is individually enclosed and thus optimally protected during ongoing operation and cleaning.” The LabelWatcher is already established on the market and is used for the comprehensive decoration inspection of bottles, jars, cans and containers.

Intravis will present its new and further developments of the CapWatcher Q-Line, which is tailored to the challenges of tethered cap inspection. Intravis will show an exhibit of this inspection system for caps at the hall C5 booth 319 of Sumitomo (SHI) Demag Plastics Machinery GmbH.

Whereas the system previously used a star wheel to separate the caps from above, a positive, lateral star wheel separation is now selected. Gerd Fuhrmann: “The external shape and stability of tethered caps pose a challenge for separation, especially as the caps are becoming thinner and thinner. With our new form-fit, lateral star wheel separation, our systems ensure perfect separation and positioning of the caps even at the highest speeds. In the process, the closures are handled gently and carefully. Due to a software logic that has been optimised for the non-rotationally symmetrical outer appearance of the caps, the tethered caps no longer have to be aligned. This further simplifies the separation process.”

The CapWatcher Q-Line is designed to meet other specific requirements for tethered caps. For the inspection of caps with internal closure aids, so-called CAM’s, an electrode that is immersed in the cap is no longer required. Intravis’ patented non-contact microhole inspection detects microholes and thus prevents damage to the inner closure elements. The CapWatcher Q-Line can be used flexibly for numerous different cap designs – regardless of whether the caps are injection moulded or compression moulded, whether they are single- or multi-part, and whether the cap elements are moulded or cut.