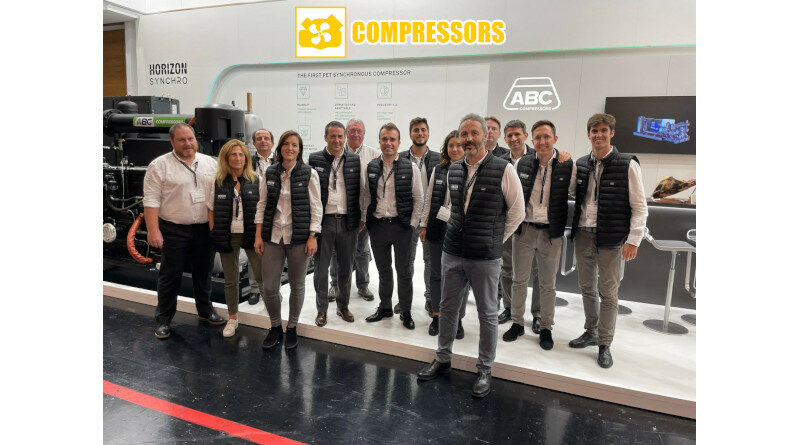 At Drinktec 2022, ABC Compressors presented its latest Horizon Synchro (branded) range of air compressors. The company says that the new machines have been designed from the start with improved airflow efficiency, better heat transfer and more stability.

Energy saving is the key feature of the new range. ABC pointed out that 80% of the total cost of ownership of a compressor over a 10-year lifecycle is attributable to energy consumption. The Horizon Synchro models are equipped with advanced IE5 motors, which are claimed to cut motor losses by more than, 20% compared to IE3 versions. They are also claimed to reduce gearbox friction losses by 3%. The range also features an integrated variable speed drive that eliminates idling times. ABC says that these models are the first on the market equipped to do so, that the drives offer the widest regulation range in the market and optimise energy usage by up to 82%.

The improved cooling circuit and cylinder surfaces reduce thermal losses by 10% and leaks, dead area and pressure losses within the airflow by 15%. Service cycles are also claimed to be the longest in class, at 8,000 h.

The Horizon Synchro compressors feature 100% digital control and automation from a single human-machine interface (HMI) point. Draining is controlled from a central point, with no need for physical intervention.

ABC is implementing sustainable development goals under the UN 2030 Agenda across its operations, including the installation of solar panels on the roof of its factory in Eibar, Gipuzkoa, NE Spain, which provide 50% of total factory consumption. It also has a system that recovers energy from compressors undergoing testing.