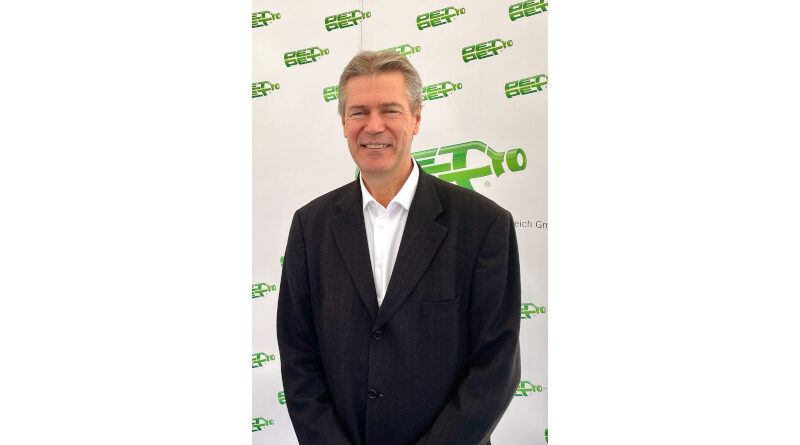 On September 23 this year, the firm PET to PET based in Müllendorf, Austria, celebrated 15 years of company and recycling history. On the occasion of the anniversary, the recycler invited guests to an open house event that took place in perfect weather. As well as tributes from the management and a trip through the company’s success story, guests from the world of politics, business and investors from the drinks industry also had their say. This was followed by a tour of the recycling plant for processing post-consumer PET bottles during which PETplanet joined in the discussions.

Founded in 2006 and launching its operations in 2007, no-one could have imagined the success and growth that PET to PET has managed to achieve. Since then, the company’s estate has increased fivefold, said Managing Director Christian Strasser to invited guests on a stage set up in the courtyard. The company has so far processed 325,000 t of PET and consistently invested in technological and sustainable development and expanded its facilities over the years, as well as overcoming lean periods caused by the pandemic. This has been achieved largely through its own efforts as Hanno Mandl from Rauch Fruchtsäfte (Fruit Juices) pointed out given Coca-Cola HBC Austria, Egger Getränke (Drinks), the S.Spitz company and Vöslauer Mineralwasser (Mineral Water) as well as Rauch also hold shares in the company.

After a downturn last year, PET to PET was able to report successful interim results, achieving new record figures for the first half of 2022: 15,131 t of PET beverage bottles kept in the resource cycle, an increase of 5.3% compared to pre-pandemic level (2019: 14,329 t). 30,000 t of PET material are estimated by the end of the year, the equivalent of 1.2 billion PET bottles. PET to PET currently employs 81 staff on a 72,000 m2 site that has a 3,300 m2 production facility and a 4,050 m2 warehouse. The third phase of the company’s expansion took place this year, with its estate growing by 19,000 m2 in order to provide additional on-site storage capacity. The newly created area is to be equipped with a photovoltaic system with approximately 12,000 m2 of panelling for providing around 15% of the required electrical energy for the company’s future production. The total investment is €30 million. Archaeological finds from a Bronze Age burial ground which were discovered by chance during the expansion were displayed publicly for the first time at the event.

Bottle procurement, the state of the market, constraints and ideas for optimisation

The huge global demand for high-quality rPET for use in food packaging requires the secure collection and procurement of used PET bottles for recycling at a time when the market situation is anything but rosy. As Christian Strasser explained. “The strong desire for food-grade recyclates for beverage bottles is also leading to an excessive demand for collected and sorted bottles for many other applications. Consequently, we have witnessed an unprecedented price development which has led to a steady growth of procurement markets within and, to a lesser extent, outside Europe”.

Strasser explained what mechanisms he believes are necessary to improve the situation. “PET beverage bottles are the only form of packaging under current EU law for which mandatory use quotas have been set. However, no prioritisation is currently envisaged that would regulate access to raw material. As a result, all applications that use PET as a material have equal access to these quotas, even if it then immediately leaves the cycle in lower-value applications. This often leads to imbalances, particularly in non-food applications. In my opinion, a structural framework needs to be put in place here. For example, new deposit systems developed in a number of European countries could help in improving both the supply and price situation which would guarantee not only higher quality but also greater quantities. The volume of returns and prioritisation in the use of beverage bottles could be fixed by lobbying brand owners and policy-makers. At the same time, it would also be possible to determine the required recyclability as part of a deposit approval system.”

Another mechanism for enhancing the quality of post-consumer material would be colour purity. Leading brands such as Coca-Cola have responded and are increasingly dispensing with coloured PET bottles from their products in order to have a positive impact on the recycling loop. However, the system is to a large extent still in its infancy.

“Of course, switching from differently coloured to non-coloured transparent bottles is a major step forward which will gradually improve both quantity and quality. However, this is a lengthy process which the recycler cannot easily influence. We are putting a lot of effort into processing the main colours used on the market, namely blue and green, in a way that is suitable for food products and using them for beverage bottles. For this, we can point to several examples of 100% of coloured recyclates in Austria”, said Mr Strasser.

In order to meet the needs of industry and to keep a recycling plant running in a commercially viable way, one cannot avoid purchasing a number of PET bottles locally which raises the question over the consistent quality of bottles from different sources. “We are mainly dealing with very small quantities, which are imported in compliance with the usual legal requirements. Adhering to specific quality standards is extremely difficult in practice and requires reliable business partnerships”, said Mr Strasser. The energy crisis is also playing a major role and poses considerable challenges for the circular economy. The use of and conversion to renewable energy is important but, according to Mr Strasser, will only result in a small reduction in energy costs. In fact, the price of food-grade recyclates is increasing and we are moving even further away from the price level for virgin material.

Where do we go from here?

Finally, we asked about future recycling possibilities and the requirement for tethered caps. Mr Strasser sees the development of chemical processes as a way of complementing mechanical recycling. “Due to the currently expected higher processing costs, mono-fractions will be treated more cost-effectively in future by the use of mechanical systems, with more complex fractions being processed chemically. As far as tethered caps are concerned, the EU Directive ensures that caps remain attached to the bottle not only after consumption but also during sorting and manipulation, ultimately ending up at the recycling plant. There, the cap can be efficiently removed ready for a wide range of applications in the cycle economy.