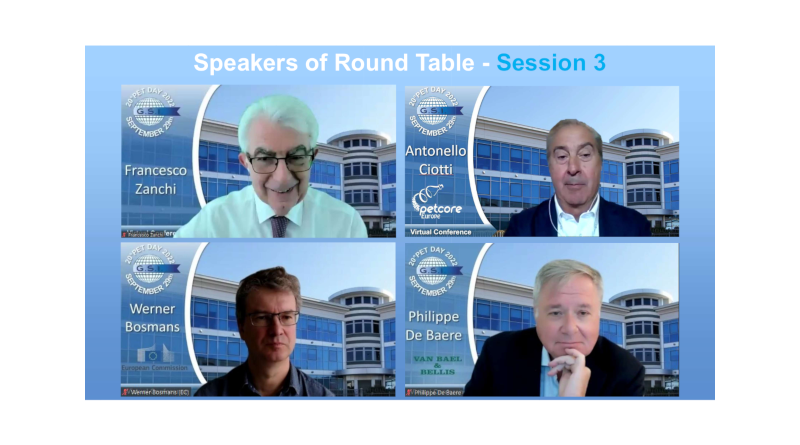 The PET Day, an annual event organised by GSI (Global Service International) of Italy, has undoubtedly become, in the 20 years since its start-up, a defining moment where the policies of the main decision makers of the industry are forming the basis for all strategic decisions for the coming years. The information and the arguments discussed within the space of this single day, which has a special mark on the agenda of all involved in PET and the raw materials of the polyester industry, are thoroughly developed and dissected and are surprisingly precise, anticipating market movements. This 20th edition, for the third time in the form of webinar, took place on September 29, 2022.

The turbulence that shook the world in 2020 has created unexpected challenges for all industries, and the industry is now urgently seeking a route map out of the storm. PET Day is the place where experts and top managers are looking at how to steady the ship out of the stormy seas and into calmer waters.

Mr Francesco Zanchi, CEO and founder of GSI, began by welcoming the specially invited audience. He underlined the difficulties the sector is facing, but he also expressed confidence that these same difficulties can be transformed into opportunities: There is a way out of this ‘perfect storm’.

The morning session was opened by Mr Paul Hodges, of New Normal Consulting, now a regular guest at the event, who addressed the economic situation, with particular regard to the inflation issue, or, better, the ‘Putinflation’ as he put it. When the unexpected happens, old models are no longer valid, he said. It is not possible to control the economy of billions of people just by acting on interest rates, as Central Banks used to do. Putinflation is taking us back to the ‘70s, he stated, but we should see the challenges ahead of us as opportunities.

Hodges continued: The trends in the chemical industry were already revealing months ago what was about to hit us. A confluence of calamities, as the IMF said. Supply chain outages have caused major disruptions: we moved from ‘just in time’ stocks before Covid to ‘just in case’ stocks (on the expectation of problems). The Chinese economy, disrupted by the government’s zero-Covid policy is not helpful. To illustrate the situation, Hodges used the image of the four horsemen of the Apocalypse: war, plague (Covid), famine (food shortages), inflation. Finally, he went on, it will take another couple of years, according to past experience, to see overvalued stock markets bottoming out. But there are new opportunities. Hodges mentioned Elizabeth Kuebler Ross and her paradigm of loss model (in relation to Covid). It shows that people react to problems from denial to anger to bargaining, then to depression and finally acceptance. The latter opens the way to eliminating the earlier pessimism.

It is necessary to transform the success factors, Hodges stated. More flexibility, solution-oriented policies, innovation, being closer to customers. And less global reach, size, location-oriented. Technology today must be greener. Sustainability, in the widest sense, is the great opportunity.

So the economic recovery of industry needs to focus on the new risks (including energy and demographics). Risk management is clearly among the top priorities: increase in financial debts and environmental pressures must be rapidly managed today by the plastic industry. Eventually, Hodges summed up, investing in the future to make everything more sustainable is the key to survival and the only way out.

Mr Zanchi, in applauding the analysis by Paul Hodges, sought to bring a ray of hope in the bleak picture of the scenario, by first introducing what GSI, through its Saint Lawrence Foundation and SBD (Social Business Development) is successfully doing in Sierra Leone to support the population of one of the poorest areas in the world. Thanks to the education of the local young generation, support in building a model poultry farm and, recently, establishing the growing of corn and maize, SBD is attempting to create a domino effect, to bring better food and health and to instil pride in local people to develop better living standards in their own homeland.

Zanchi then started its analysis of the global polyester market: PTA has a big overcapacity issue, and next year it will be even bigger, MEG too. PET production in China will be in surplus by 7 million tons. That means all margins will be squeezed further. And there will be a bigger push to export excess capacity from Asia. In Europe demand and production are steady. But manufacturers will have huge problems in 2023 to run at full capacity, due to the huge increases in energy costs and possible power outages. PET and raw materials will again become more competitive from China (and a few other countries like Vietnam, Indonesia and Turkey) as Indian producers will have to face a return to higher import duties from January.

The situation of recycled PET is totally different. There is lack of material today and that will remain also until the 2025 deadline (for the target of 25% rPET in beverages). The estimate is that Europe will need 400,000 t/a by then! Hardly a negligeable amount. Zanchi stressed the point that, apart from improving bottles collection, it will be necessary to facilitate import of flakes and rPET from outside Europe and relax a number of regulatory constraints which, today, are stifling any increase in the use of recycled materials in the bottling industry. The logistics situation also is still an issue currently but, at least, freight rates are appearing to drop week by week.

Zanchi pointed to some final questions worth considering. Among them, the evaluation of the effect of the sanctions on Russia, the Dollar/Euro rate, the increase in all production costs making Europe less competitive, and support for speeding up a circular economy.

The afternoon session of the webinar opened with a first round table on the current situation facing the PET industry. Mr Hemant Sharma (Reliance) explained the efforts done in India to develop bottle and plastic collection and organise a PET recycling industry which is becoming a model for Asia and the world. Mr Hikoji Kosaka (Toyotsu PET Recycle S. – TRS) showed the activity of its new company, an investment of the Toyota Group into PET recycling, with a brand-new capacity of 40,000 MT/a.  Mr Christian Mayr (Alpla) underlined that the industry in Europe will be losing competitiveness but also consumers, and that increasing imports is merely a short-term remedy. Then Mr Dirk De Cuyper (Resilux) stressed how also his Group is already well into recycling activity, and called for more protection of the recycling chains in the old continent to make them sustainable and more competitive than virgin products.

The second round table, on topics related to ‘Distribution & consumers trends’ started on a high note with the presence of Mr Hans Van Bochove (Coca-Cola). He explained that the limits imposed for 2030 on recycled contents in beverage bottles are just the minimum: people expect to get 100% of recycled material. But the fact is that there is not enough rPET in the market, and not of the right quality. Then Van Bochove brought some breaking news, disclosing that new regulations are coming soon from the EU Commission, particularly on packaging directives and collection. They will be game changers. There will be a more decisive push towards the encouragement of re-usable packaging (beverages will have an obligation for minimum 5% re-use). Most important is that the involvement of retailers towards collection will be considered an important necessary step forward, by requesting Member States to define how they propose to enact their own deposit return system rules.

Mr Coert Michielsen (Refresco) agreed that it is possible to do more in Europe. Collection rates must be improved, and Japan and India are an example. The new rules of the EU, as explained by Van Bochove, will ensure better quality material for bottles too. In his opinion the EU should make it mandatory for retailers to accept collecting, making them more responsible on this issue.

Closing this intriguing round table was Mr Philippe Gruyters (EMD, European Market Distribution), who is opening the way for the very first direct presence of retailer opinion in the PET Day. Gruyters explained that retailers already have their own policies on packaging and the use of recycled content. They are open to dialogue and to contribute to improve the system. However, it is necessary to study together with the small and big suppliers how to proceed, and the decisions must be for the long term, avoiding changing policies every one or two years.

The third and final round table examined the relationship between the circular economy and the current legislation in Europe. Mr Werner Bosmans (Policy Officer Environment, EU Commission) stated how the European Green Deal deals with the circular economy not underestimating the value of plastic, and PET in particular. The EU Commission is also working on a policy for bio-based and biodegradable materials, and on new rules for safe recycling in food contact materials. He finally declared that the Commission is most certainly not against plastics, but aims at tackling their unsustainable use.

Mr Antonello Ciotti (Petcore Europe) criticised instead the Commission, as recently there has been a veritable ‘tsunami’ of directives on plastics and recycling, making life difficult for recyclers activity. Then he stressed how successful was Petcore Europe’s campaign to explain to the general public and consumers how PET is a really a ‘different’ kind of plastic. Finally, Mr Philippe De Baer (Van Bael & Bellis) summarised all the current expected legislation from the EU Commissions, on SUP directives and also packaging waste directives. The effects of these new regulations may support the growth of the rPET market, increase demand and therefore exacerbate the imbalance between supply and demand of recycled material, in essence confirming what Mr Zanchi had discussed earlier during the morning session.

Zanchi himself, in his closing statement, therefore insisted on this point, appealing to the  EU Commission to make it easier to import flakes and rPET in Europe, for example by scrapping the need for reach certifications for these items. This point did not find Mr Bosmans open (yet) for discussion. He felt confident that the market would adapt to prevailing circumstances noting that the targets the EU have already imposed for 2025 and 2030 are likely to be increased!

This argument will surely be on the table for a long time, and will inevitably be strongly debated again during the next PET Day event in 2023.